Earlier in 2014, the Legatum Institute published the final results of their Commission on Wellbeing and Policy. I don’t know much about this think tank – it seems to lean rightwards, claims to be non-partisan, and is probably funded with oil cash, but they put together an all-star cast to advise this report:

It is a superb piece of work. If you’re interested in the role of government, public services, evaluation, economics, life, the universe, or indeed anything, you should read it. Lots of golden nuggets and summaries of vast amounts of academic research. It should be shaping the way governments work, everywhere.

Its main conclusion is a call for the greater use of subjective wellbeing data in policy making. It argues that we need to stop using money as a proxy for wellbeing in basic cost-benefit analyses. The logical second conclusion of the report is that we need better data. It’s not impossible – wellbeing really can be measured. And we’re getting better and better at it. As we get better data, governments will be able to take far, far better policy decisions, which in turn should increase our wellbeing. It’s fairly intuitive, but could be revolutionary.

The report is 80 pages long, but here’s my precis:

How do we measure wellbeing?

The Organisation for Economic Cooperation and Development’s “How’s Life?” report of 2011 led the way on much of the measurement and statistical data collection front regarding wellbeing, and gave us the ‘three broad concepts of subjective wellbeing’:

An example of how each of these plays a different role in wellbeing is in having children. This  “has been shown to have a negligible (or even mild negative) correlation with average levels of life evaluation, and child care (even of one’s own children) has been shown to be associated with high levels of both positive and negative affect. However, people with children report much higher levels of meaning or purpose in their lives.”

What tends to determine wellbeing?

“In general, the evidence from subjective wellbeing supports intuitive views as to what matters to people – health, income, not being unemployed, and social contact are all important. However, it can also provide some more surprising results, such as that procedural issues have an intrinsic contribution to wellbeing, not just an instrumental one. For example, both feelings of confidence in government and public institutions, and the level of direct democratic engagement through referenda and other means are associated with high levels of subjective wellbeing…”

Why are measures of wellbeing more useful than standard economic models?

Analysis of subjective-wellbeing measures can shed light on some of the fundamental assumptions about human behaviour. For example, the axiom that efficiently functioning markets maximise wellbeing depends crucially on the extent to which people are able to make choices that will in effect enhance their wellbeing.

Subjective-wellbeing measures can take the debate beyond a simple theoretical argument about whether there are externalities present or whether people are fully rational, and enable analysis of what sorts of errors people actually make in forecasting their future affective states, and how significant errors in judgements of this sort are compared to other factors.

One particularly important policy use of measures of subjective wellbeing is in the treatment of non-monetary outcomes in cost-benefit analysis.

Existing ways of obtaining values of non-monetary outcomes for cost-benefit analysis – such as willingness to pay or the use of shadow prices – are expensive to collect and known to produce results that are neither always intuitively plausible, nor internally consistent, and which can be heavily affected by strategic decisions on the part of those surveyed.

Measures of subjective wellbeing are cheaper to collect, produce relatively consistent results, and are mostly immune to strategic manipulation by respondents. For example, by looking at the marginal impact on subjective wellbeing of say, an improvement in health status as opposed to moving from employment to unemployment, it is possible to estimate the effects of a given output on wellbeing.

What do we need for wellbeing?

Income matters. But, on the external side of our life, the most important thing is the quality of our personal relationships – at home, at work (including whether we have it), and within the community. And even more important is our internal state – our physical health, but even more importantly our mental health. The effects of bad health upon life satisfaction are huge and bigger than the effect of losing a large fraction of your income.

By contrast, work certainly provides much more than income. In fact, evidence from the German Socio-Economic Panel shows that almost any job is better for wellbeing than no job, even if this is not always obvious to everyone who is unemployed.

[Mental health] is the single biggest factor explaining the cross-sectional variation of life satisfaction in the population.”

Mental health and character-building is priority number one. if we wish to predict an adult’s satisfaction with life the best single predictor is their emotional health – their levels of depression and anxiety. That is the case whether the prediction is made when the person is a child or when the person is already an adult. Includes supporting parents; building character and resilience in schools.

This also points to the extreme importance of children’s emotional health. It’s far more important than their intellectual ability, something recognised in Finland, whose first focus of education, from “pre-school to (late-entry) primary is the social and emotional development of the child …[and] educational attainment follows.”

What does this all mean for how government makes policy?

When a government is deciding what policy to introduce, civil servants will often perform a cost-benefit analysis. What is analysed is the monetary cost or benefit. The authors point out that while this might work for certain transport, education, environment and industry policies,  the bulk of public expenditure is on health, elderly care and child welfare, which is much harder to value by only using monetary values.

Thus we must move towards measuring the value of government action in net-wellbeing-per-dollar. Steps in the right direction are being made in public health economics with the use of QALYs – whereby the Quality of any additional Life Year is taken into account when deciding whether to provide x treatment – but these too could be significantly improved.

This kind of thinking also leads to some fascinating – difficult – questions about discount rates: how do we count those not yet born? (There’s an even harder question about whether, if we could guarantee wellbeing, we should incentivise a larger population: is a population of one million happy people as good as seven billion happy people? There’s an Economist article which provides an argument that a shrinking population might be no bad thing.)

Ergo, we need more research. As the authors state: ” [wellbeing measurement] should become a major objective of social science (and of its funders, such as the UK’s Economic and Social Research Council) to throw light on the causes of subjective wellbeing and how it can be enhanced and at what cost.”

There are a few obvious policies that are already demanded by the existing data on wellbeing. These are quickly summarised below: 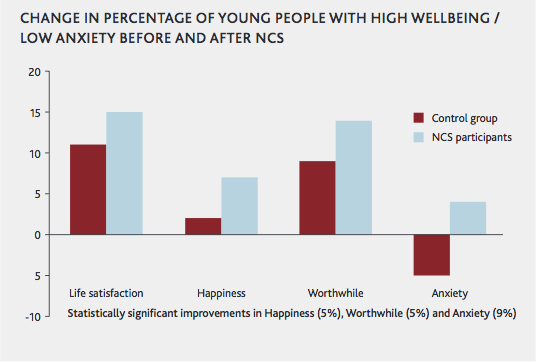 The full report is available as a PDF here.

[…] Source: Why it’s time for governments to take wellbeing seriously […]